YOU ARE CORDIALLY INVITED TO ATTEND THE GRAND OPENING OF THE MONUMENT OF STORIES: “COLORED BY WAR”….

A Multi-Dimensional Monument of stories build up of portraits, diaries and film: an exhibit of Monica van Rijn

Thursday, April 14, 2016 , 16:00 – 19:00 hours The exhibit will be opened by Gerlof Leistra, journalist for Elseviers weekly magazine, who is both historian and writer. Singers Robin Halvers en Anne-Liline de Dreu will perform their own song about freedom commissioned by the Nederlandse Pop Academy and inspired by the Colored by War project.

FREE ENTRANCE, YOU CAN ENTER WHENEVER YOU LIKE, NO RESERVATIONS NECESSARY.  THE EXHIBIT RUNS FROM APRIL 14-MAY 26, 2016

SPEECH “MY MOTHER WAS STRONG” BY MONICA VAN RIJN:

during the annual WWII Memorial gathering and two minutes of silence

at the war monument at the southern entrance of Vondelpark close to Amstelveenseweg; afterwards everyone is welcome to attend the exhibit and see the Colored by War films at the ‘De Buitenhof’ Theaterzaal Vermaeck, Nieuw Herlaer 2, 1083 BD Amsterdam Buitenveldert

AEVENT CALENDAR IN MAY DURING THE COURSE OF THE EXHIBIT IN “DE BUITENHOF”:

For schools: tuesday May 11: by appointment

For residents of ‘De Buitenhof and walk-in writing afternoon:  to be announced.

An overview of Monica van Rijn’s paintings accompanied the preview of the interactive, visual monument of stories: The Making of ‘Colored By War’ in the Northern area of Amsterdam from December 10, 2015 through January 15, 2016. 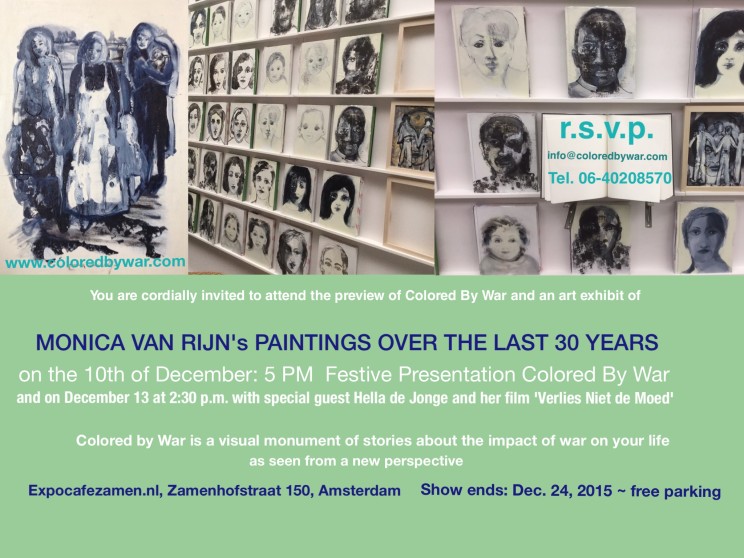 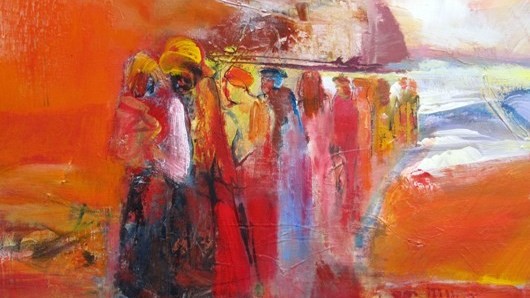